The joys of One Direction loving Philippa

Miss Pip has led me a merry dance this year.  Anyway after rough start she is doing much better.  This week has been a full on week for  her as she has to do a first aid certificate in addition to her usual three full days at college.  Then she is leaving for church camp at 6 pm on Friday afternoon.  Today she successfully completed the first aid certificate on her first go.  So it was reward time.


Imagine  One Direction Photo
There millions of them and I cannot snaffle one.
Technological idiot indeed

Today was the official release date for the One Direction movie.  So I told her I would pick her up and whisked her off to see her beloved boys.  To say I was dreading the experience would be an understatement.  We managed to see the movie just before school finished.  Hence the cinemas was far from filled and the girls were so quiet.  There was not one scream or simple squeal.  The audience was perfect.  I have been to screenings for older peoples movies that have been rowdier.  So i thank these Directioners for their behaviour and have to admit I sang along too.  It is amazing how quickly I learn songs and I didn't see why I should miss out on the opportunity to have some fun!

After that success Pip and I went to buy her a sleeping bag for camp.  Fortunately we have a mild climate and she does not require any specialist heavy duty gear.  We trotted off quite happily to Big W and the girl chose herself a purple One Direction effort.  Philippa was quiet determined to have this despite being informed that she was making herself a target for those who like to tease.

The amount of merchandise in the stores is phenomenal.  The band starts to tour her very soon and the marketing has begun in earnest.  There are pyjamas, t shirts, towels, bedding, torches, pens, pencils etc and so much more.  The number of people making money from the boys is amazing.  Of course Simon Cowell must adore them.  He is earning millions.

However when I reflect I am happy that Pip has some focus.  She loves music and plays the flute and cello.  She sings and dances.  Early this year that side of her was in hiding.  At least she is staying away from some other things even though those lads are just young men working long hours etc and do let of steam.  Some of the lyrics, behaviour and tattoos concern the very vanilla me.  I loved the sound of boy bands in my youth and still like to listen to that sort of sound.  I cannot judge harshly.
Posted by Suze at 5:37 AM No comments:

Truthfully my week has been so humdrum.  I have had to watch the pennies so my little sealed pot has not had any donations.  There have been no real trips out.  Some funny jobs have been done.  I suppose the dearth of excitement will make my next treat seem marvellous.
Posted by Suze at 3:10 AM No comments:

Quilts from yesteryear- The Rajah Quilt 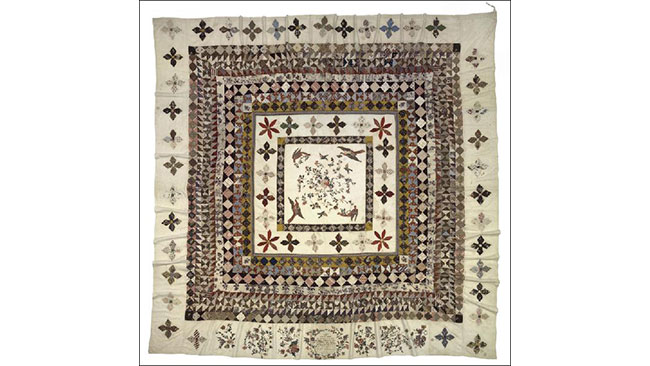 This is a photo of the Rajah Quilt.  This quilt was made on board the ship Rajah.  It is thought to have been made by group of convicts who were being transported from England to Tasmania.  There must have been made by a number of women as there are many different stitching styles and stitch sizes.  Not every convict was a proficient needle woman.  Some unknown person must have masterminded this work. The quilt was sent back to England as a thank you gift for Elizabeth Fry.  Elizabeth Fry and her ladies formed a group which organised for activities and other things for the convicts to do.  If you could sew you would have some employable skill in the new colonies.  It is not known if Elizabeth Fry ever saw this quilt as the quilt was lost for some years.  It is frail and small blood and perspiration stains show.

Ever since I heard of this quilt I have wanted to see it.  It has been on show as part of the "Quilts 1700 to 1945" at the Queensland Art Gallery.  Today I finally made it into town to see this treasure.  The fabric in the middle is of a better quality and has broderie perse to form the central medallion.  Then there are borders of various patches and finally another border with more appliqué.  At the bottom there is a cross stitch section which tells the story of the gift.

I felt like I witnessed one of our national treasures.

The exhibition had other beautiful items which took my breath away.  Tiny seed beads worked into pin cushions.  The needles must have been so expensive and rare as they would have been so fine  A purse that was someone's sampler type work.  There were bed hangings and quilts.  Some of them had the closest quilting.  I was in awe of the stitching that was oh so small.  Some of the quilts were made of military materials which would have been quite a challenge.  So many quilts had stories to tell.  There were quilts made of ribbons and others that tell the age old story of recycling at its most useful. One quilt even had a map of England and each county was named. Even the backs of some quilt tops were shown.  Interesting bits of newspaper, account and copy books were there to be seen. It was an experience that was well worth my entry fee.

I certainly hope you have been able to follow my ramble about this incredible treat.

My pot has filled a little more this week and now weighs in a 2482g which is a 210g gain.  It sounds like I am talking about a baby.  In a way this is my Christmas or splurge baby.  It has had two days with no contribution.  Today because every last cent is now gone four days early because I booked into a course at church and on Wednesday because I donated all my change to the Legacy appeal.  I am beginning to wonder how much will be there at the end of the challenge. 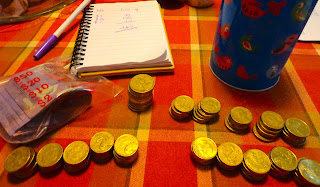 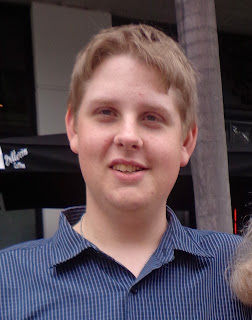 My eldest, William, also had a big day today.  He is now one step closer to finishing his apprenticeship as a chef.  Well done my sweetheart.  You have worked harder than most people know to achieve this milestone.
Posted by Suze at 7:21 AM 2 comments:

My middle child, Bethany, is studying dual degrees in French and Education.  This is the end of her third year and today she begins her first true practicum.  Best wishes sweetness.  I know that you will find many who will love your presence as you shine so brightly. This a photo of Philippa and Bethany.  Pip is wearing the flowers.
Posted by Suze at 3:14 PM 4 comments:

Today I gave some money to some soldiers who were collecting for the Legacy appeal.  War is terrible and those who are prepared to serve for us all deserve all our support.  If you see a collector please give, even a little can help.  Thank you.
Posted by Suze at 1:38 AM 1 comment:

Suze
Australia
I am an Aussie mum of three. I work as the carer of my father. I began this blog to try and work out a way to settle my life into a happier place.